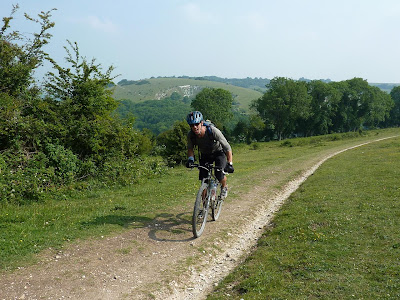 Just another day as a Sustrans Bike It Officer...
We woke early trying to remember whether we had everything ready for the event at Westdene Primary School, oh well too late now, nearly 500 kids would be waiting for me at school in an hour or so! The kids were to be riding into school as they had all week. It was part of a competition against 15 other schools in the city to try and ride as a school, the equivalent distance to the South Downs Way Double, 200 miles, a challenge... Emission Impossible! I had been running around all week working with 16 schools collating the numbers of cyclists they had each day and feeling that they were all really trying to get as many kids cycling as possible, it was fantastic... I had challenged the school to a race, not only against each other, but against me. If they could ride in all week then I would ride the South Downs Way Double, 200 miles in 24 hours, with one gear... hopefully the right one! 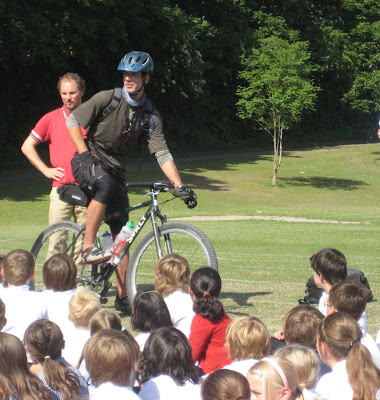 The event was amazing, the kids got a free breakfast for riding in, the council and the deputy mayor turned up to celebrate cycling, Emma, my teacher champion played a blinder and organised the kids to marshall the event and we had a cycling assembly outside the bike sheds on the school field. I counted 138 bikes, many of which were dressed up in fancy dress of all shapes and colours. The heat of the sun was already making itself known... in a moment I would be setting off up the hill and on to the South Downs Way, for a very long time!
Then suddenly, after a prize giving assembly it was my turn to say thank you to all of the kids for making such a supreme effort, and to jump on my bike and wave goodbye... I was off to applause from the whole school, an amazing send off. Out of the school gate and into the blazing heat! John from M's Cycles rode with me up to the start at Devils Dyke and we chatted as we went up the hill. I made some adjustments to my rucsac which was really stuffed with as many calories as I could carry. John had been a great support in agreeing to see me off and I really appreciated him being with me as I set off. 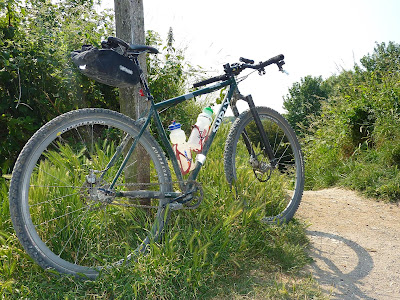 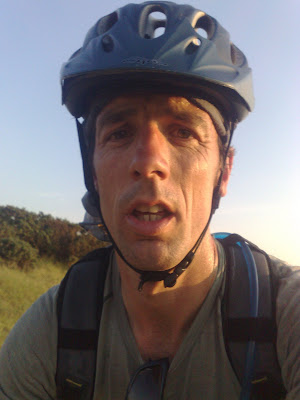 I managed to get pointed back to the route after doing a loop on the road near Exton. I had been in panic mode and not enjoying the uncertainty of this section having not pre ridden it. Somehow I managed to get myself together and focus but my schedule was slipping as I got back into the swing of things in the woody shade near Milbarrow farm where I managed to make yet another wrong turn and back into panic land... Focus... Breathe... Retrace...
I had really not enjoyed the last section but was focussed on meeting my old mate Jay as I approached Winchester. Hot Hot Hot! Down the track into Chilcomb I rounded a corner to see Jason, a really welcome sight. The traffic was pretty full on and strangely alien as I entered the hot city and made a quick call to Rory who I was going to meet up with near Cocking, no time to stop as I turned round to get back to Jason for some welcome company. It was great to ride withmy friend as the miles ticked by, my pace was up now that I was familiar with the route.
The new temporary route that I took meant a relentless climb past the dusty vineyards, barely able to push the bike up old Winchester Hill. The heat was draining out of the day and it was a welcome relief, finding that I was able to climb on the bike more instead of walking. We sparred downhill like we we were fresh on the trail and I felt elated to be heading back. Bad news on the phone as I spoke to Rory who had taken a tumble on his way out to meet me from Cocking and was on his way to A&E!!!... What is it about that place!?
The way that I arranged to do this ride, setting out from Brighton, meant that the ride was done in thirds with Cocking on the way back, being the 100 mile point. Still Winchester was a major turning point and we flew back to QECP where Jason headed for home and I was once more alone on the trail, just the buzz of my texts from Catherine to keep me company. 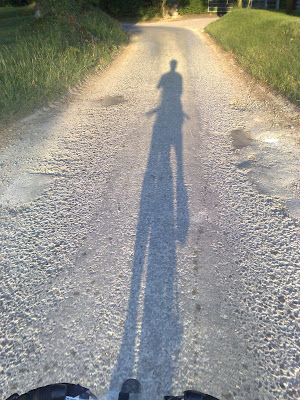 I was looking to get as much covered in the cool evening as I could before I had to start night riding. There was a full moon so I was using the minimum amount of lighting and I hoped to be back on familiar home territory before the night fell. I reached my half way point at about 9 and was relieved to be able to take on water again. As the night fell I was aware of all the wildlife I was sharing the trail with, The Exposure Joystick was more than enough as the pink moon helped me find my way, badgers shuffled out of my way and I startled a herd of deer, grazing, they took off and left behind a baby who got stuck in the fence as it tried to escape. I had to help it through as it squealed in distress, scampering to the cover of the woods. 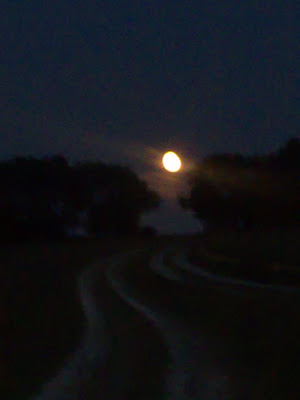 As I neared my start point and 135 miles, complete tiredness took over and I went into a zombie state, plodding along at a snails pace trying to keep going in the darkness. I came down to the A23 near Saddlescombe for a welcome relief from the blackness and some smooth tarmac as I crossed over Pyecombe where I managed to get lost! Really tired. Plodded up over Ditchling Beacon, feet walking like I was riding a bike stabbing the floor with my cleated feet and stumbling all over the place. 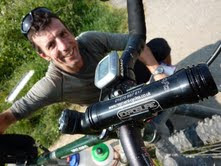 Relentlessly up and down, I sat down for a power nap for half an hour at Southease in the chill of the early morning. Up and back on the bike and up Firle Beacon with new energy and life in my legs as the mist covered the Weald to the north. I descended to Alfriston knowing that this would be hell on the way back. I was losing time all over the place. This was the worst part of the whole ride as I slowly plodded up out of Jevington and up over Willingdon Hill. Then just when I was so close to packing it all in I saw Eastbourne below me, glinting in the early morning sun. 20 hours done, had to get back in 4 the race was back on again as I turned for home.
Alfriston Hill was the hardest of the whole ride on the way back but as I reached Firle I was going stronger, though I had to eat and I was completely nauseous at the thought of more energy bars and sweet things, so I dropped down off the downs and made a dash back to the garage near Kingston for a cheese sandwich. Go Go Go! I was sprinting now as my mate Pete was coming out to meet me and I knew that Catherine would be at the Dyke at the end. I also arranged to meet Rory, I felt good now as the legs started spinning up towards the Beacon . I saw Pete, Jules and Tom at the Beacon and sprinted towards them, this gave me a real much needed boost, and I took off like a bat out of hell! I was desperate to get in under 24hours. A quick call from Rory reassured me I could do it. I flew down to Pyecombe and sprinted up Pyecombe Hill like it wasn't there. As Newtimber loomed up I'd forgotten how tall it was. Rory called to say he'd spotted me and I called on reserves that I never knew I had.
As I descended into Saddlescombe, I caught a herd of cattle under the trees who scarpered as I thundered down the hill. Whoops of encouragement as I flew past Rory camera snapping, I leapt off the bike and ran up the first part of the hill towards the Dyke, lungs on fire. Before I knew it Rory was there again snapping away and then Pete cycled towards me, a sight for sore eyes! I was desperate to get there for 10am as I had told Catherine I would get there then. 9.58 racing towards the gate Pete chasing at my heels.......and there it was, it was all over, I'd just finished the SDD in 23hours 40mins and 13 seconds.
A wave of emotion overcame me as I saw Catherine and the girls, I thought I would keel over! 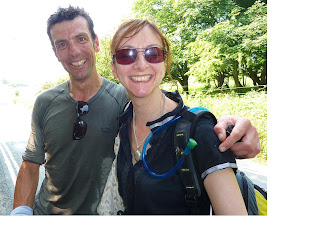 What an amazing reception. Everyone descended on me and took everything out of my hands. All I remember was people telling me to get in the shade, and handing me sweet drinks and cooling me off with cool water. Pete's coffee had never tasted so good! As we were celebrating Rob Dean showed up overshooting the car park at great speed, it was great to meet another SDD and it was lovely to have such encouragement from so many wonderful people. Pete noticed that 5 minutes after getting back I was already talking about next time.....we shall see.
Thank you to everyone for the support they gave me, Catherine for worrying herself all the way through the night and her unending support, Pete, Jules and Tom for keeping the faith, Rory Hitchens for keeping me going through the hard parts and his amazing enthusiasm, Jason Falconer for giving me someone to chase on the way back! Also, John from M's Cycles for seeing me off in style, Rayment Cycles for so generously loaning me the fantastic lights at a really short notice! Rob Lee , Lydia Gould and Ian Leitch, for their kind messages. Thank you to everyone who took the time and generously sponsored me, all donations will be going to the Trevor Mann special care baby unit, a cause close to my heart as they were so dedicated when my daughter Josie was born. 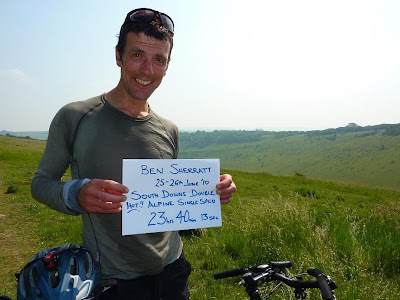 Lastly a big thanks to all my Bike it schools, especially Westdene, for such amazing support and inspiration, which got me through the small hours. Keep on cycling!!
Thanks to Rory Hitchens for the photos...
Posted by bikeitben at 01:16

Links in the chain